The applicant, In-N-Out Burgers, Inc., is an American corporation that has owned and operated burger restaurants in the U.S. since 1948. As at May 2016, there were over 300 such restaurants. It is expanding at 15 to 20 restaurants a year. The applicant is the registered owner of six Australian trade marks. These are three word trade marks and three composite or stylised trade marks. The three word trade marks are IN-N-OUT BURGER, ANIMAL STYLE, and PROTEIN STYLE. The composite trade mark set out below is the subject of one registration in class 30, another in class 42 and a third in classes 29, 30 and 43.

The respondents adopted DOWN-N-OUT in respect of burger restaurants in Australia. The evidence that was adduced clearly indicated that the respondents were attempting to springboard off the reputation of IN-N-OUT when they adopted DOWN-N-OUT. For example, initially, the third respondent, Saliba, asked a graphic designer to make a “a funk n burgers sign like in n out burger” and emailed him a copy of the above In-N-Out logo. The respondents made repeated “cheeky” references to “In-N-Out” in their marketing blurb. One Facebook promotion set out: “This time on the menu we have the legendary In ‘N’ Ou… I mean the Down ‘N’ Out burger served up…”. Also, some original artwork used at pop-up events hosted by the respondent included the identical colours of the applicant’s branding.

Sometime before 5 May 2016, Kagan, the second respondent, and Saliba decided to open their first pop-up and call it DOWN-N-OUT. Saliba contacted the graphic designer with three logos: 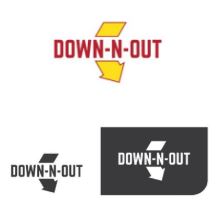 Her honour held that the font was different, but the difference was unlikely to register with the viewer. She noted that the colours were identical. That logo and similar logos with those colours were used in social media and in restaurant branding.

After receiving a letter from the applicant, Kagan and Saliba made variations to the logos to remove the colours and the arrow. However, those logos continued to be used, for example: 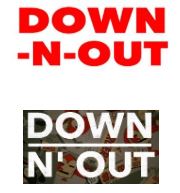 Disingenuously, Kagan apparently responded to a query from the graphic designer as follows: “To put it as simply as possible – each element on its own isn’t infringing on anything. But everything together is enough to fool the stupider people in society into thinking that we ARE In-N-Out.”

The evidence showed that various other changes were made in response to concerns about the original Down-N-Out logo.

The respondents’ business grew significantly and was experiencing continued success.

A “Trade Mark” is a sign used, or intended to be used, to distinguish goods or services dealt with or provided in the course of trade by a person from goods or services so dealt with or provided by any other person. A “sign” is broadly defined to include the following or any combination of the following: “any letter, word, name, signature, numeral, device, brand, heading, label, ticket, aspect of packaging, shape, colour, sound or scent”.

As set out in E & J Gallo Winery v Lion Nathan Australia Pty Ltd [2010] HCA 15, citing Coca-Cola Company v All-Fect Distributors Ltd [1999] FCA 1721, a sign is used as a trade mark if it is used as a badge of origin, to denote a connection in the course of trade between the goods or services in question and the person who applied the mark to those goods or services.

Her honour recited the relevant principles:

There was some discussion as to whether “Down” and not “D#wn” could be found to be deceptively similar. The respondents had used the hashtag in one of their signs. Her honour held that the natural way to pronounce D#WN N’ OUT is “down n’ out”. This was borne out by evidence of an answer of “Down N Out Ryde …” to a phone call to a store using the hashtag.

The respondents submitted that the Down ‘n Out (DNO) word marks are not deceptively similar to the applicants’ registered trade marks. The respondents made the following points:

Her Honour discussed the question of an emphasis on the first syllable of the word in ordinary conversation. Shanahan’s Australian Law of Trade Marks & Passing Off (Thomson Reuters, 6th ed, 2016) points out, at [30.1550], that there will be cases where the emphasis is placed on another syllable or where the latter part of the word is the more unusual and distinctive. In Vivo International Corporation Pty Ltd v TiVo Inc [2012] FCAFC 159, the Full Court upheld the finding of the primary judge (Dodds-Streeton J) that VIVO was deceptively similar to the TIVO mark when used in relation to similar or closely related goods or services, amongst other things, because of “the very considerable aural similarity between the marks”. Her Honour took the view that N-OUT is a distinctive and significant feature and an essential ingredient of all the registered trade marks. She drew on an analogous finding that “& GLORY” was an essential or distinguishing feature of the mark SOAP & GLORY in Soap & Glory Ltd v Boi Trading Co Ltd (2014) 107 IPR 574 at [33].

Her Honour agreed that “down and out” and “in and out” can have different meanings. But focusing on the idea or impression created by the DNO marks can distract from whether people with imperfect recollections might be confused or deceived. That is the question that matters. Ordinary consumers are unlikely to undertake the respondents’ deconstruction.

The first was a table prepared by the applicant of “examples on Down N’ Out’s Social Media Pages that associate or confuse Down N’ Out with In-N-Out.” Her Honour found it difficult to put weight on that evidence. None of the authors gave evidence. It was conceivable that this this was “just joking around on social media.” However, Her Honour pointed out that it is not necessary to adduce evidence that anyone was in fact deceived or confused. The test is an objective one. She felt that the evidence of the social media posts did have some probative value because it did raise the possibility that some people did wonder about the relationship between IN-N-OUT BURGER and DOWN-N-OUT. Neither Kagan nor Saliba answered questions raised in the posts or removed the posts. Her Honour held that it was reasonable to infer that they were happy to leave the question hanging.

As set out above, the owner is not obliged to prove intention in order to establish infringement. However, in Australian Woollen Mills at [657] it was held that: “when a dishonest trader fashions an implement or weapon for the purpose of misleading potential customers he at least provides a reliable and expert opinion on the question whether what he has done is in fact likely to deceive.” As set out by Her Honour:

“The evidence establishes that it was no coincidence that Messrs Kagan and Saliba settled on the name DOWN-N-OUT. The respondents’ own media release referred to the adoption of the name as “cheeky”, thereby owning up to their impudence. In closing argument, the respondents accepted that the “N-Out” was taken from the applicant’s trade name IN-N-OUT BURGER. They adopted the DOWN-N-OUT name, not to paint a picture of a person down on his luck, but to remind consumers of IN-N-OUT BURGER. On the face of the evidence, Messrs Kagan and Saliba chose the name DOWN-N-OUT because of its resemblance to IN-N-OUT. Why would they do that unless they believed that they would derive a commercial benefit from doing so?“

There were two pieces of evidence that that led Her Honour to conclude that Kagan and Saliba were being dishonest. The first was Kagan’s emphatic denial that they had ever used the terms “Animal Style” and “Protein Style” for their menu items. This denial was inconsistent with a media release by the respondents. Her Honour concluded that Kagan’s denial was knowingly false. The second was the respondents’ lack of compliance with their discovery obligations. The reasoning there is too extensive for this post.

Her Honour concluded that there is sufficiently close resemblance between the two names to give rise to a real, tangible danger of confusion. As Luxmore LJ observed in dissent in Rysta Limited’s Application (1943) 60 RPC 87 at [108–9], speaking of a case of aural similarity, in a passage adopted by Viscount Maugham with whom Lords Thankerton and Wright agreed in the House of Lords in Aristoc Ltd v Rysta [1945] AC 68 at [86]:

“It is the person who only knows the one word, and has perhaps an imperfect recollection of it, who is likely to be deceived or confused. Little assistance, therefore, is to be obtained from a meticulous comparison of the two words, letter by letter and syllable by syllable, pronounced with the clarity to be expected from a teacher of elocution. The court must be careful to make allowance for imperfect recollection and the effect of careless pronunciation and speech on the part not only of the person seeking to buy under the trade description, but also of the shop assistant ministering to that person’s wants.”

A David and Goliath tale with sweet ending for David